Get ready to start your dream business! This self-paced guide delivers a fool proof, easy to follow 5 step action plan that has been proven to work and get results. If you have started an idea and stopped, procrastinated or just plain ran out of steam - this course will change everything!

You will learn how to bust past the roadblocks, gain traction and steer yourself in the right direction. Do not second guess yourself. You can do this and there is a system in place that will help you achieve your goal of starting a business. Get started today and start building wealth, pride in your idea and a legacy.... If you want to start a business, you can!

I have used these tried and true techniques to develop my businesses and sold over $1,000,000 in merchandise - all online. Now, it's your turn! 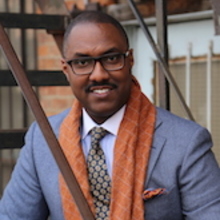 Rich Taylor is an entrepreneur, author, podcaster and innovator. In 2014 Rich took his love of men's style and fashion and established his own brand, named after his son, Harrison Blake Apparel. Prior to the brand launch, Rich spent a few years as an Apparel Manufacturing Supervisor at one of the highest volume producing apparel in the world, supervising the spreading and pattern cutting team. Rich has used these insights and knowledge of the apparel manufacturing to provide high quality neckties and accessories. If you're looking to start a brand or develop your idea, you're in the right place!

His social media accounts have grown to over 100,000 followers on Instagram alone and he's developed a system that can generate multiple six figure sales year-after-year.

Rich began his entrepreneurial journey back in 2009 when he penned his debut novel. The book earned 5 Shades of Romance Magazine Readers Choice Awards. After releasing four more fiction novels Rich penned a guide for men seeking to transform their style and attitude. The end result was his first non-fiction release, The Life of a Gentleman. The book received high praise and many youth organizations have used it as a resource to help young men develop. Rich now hosts a weekly Podcast with the same name, The Life of a Gentleman.

In 2016 Rich received a 100 Men of Color Honoree Award for men who have become role models for their community.

As a consultant and coach, Rich is excited to assist others in reaching their full potential and help them acheive whatever they put their mind to. He works with entrpreneurs who are launching their own brand and helps develop their business ideas into profitable ventures. These  techniques he do not have to be expensive as you will find, creativity and innovation are the keys to success. In his spare time he enjoys cooking, listening to various forms of Jazz, shopping for antiques and spending time with his family...

Make the Investment in Your Future!

Now is the time to Start Your Business!

Learn from an experienced guide and get off to a great S.T.A.RT.

Sign up now!
We suggest moving this party over to a full size window.
You'll enjoy it way more.
Close
Go Fullscreen